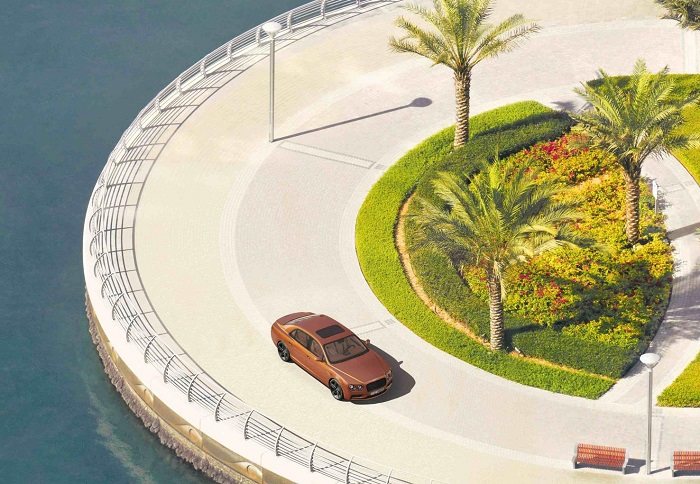 The launch of a new Bentley generally involves a bit of fanfare – after all it’s not a brand for the average motorist. So, unveiling the new Bentley Flying Spur W12 S via a gigapixel image of Dubai would certainly do the trick.

Gigapixel images are incredibly detailed photos composed of around one billion pixels, used in industries like astronomy, geology and military intelligence. It’s not the first time Bentley has gone for a bit of digital wizardry to create a stir – last year it used the NASA-derived tech to great effect while launching the Bentley Mulsanne on San Francisco’s Golden Gate Bridge.

To create the image – which depicts the Flying Spur parked in the Dubai Marina, surrounded by the wealthy city’s skyscrapers – Bentley suspended a camera (designed to withstand 40-degree heat) 264 metres in the air on the Cayan Tower, one of the tallest buildings in Dubai. It took 48 hours and 1,825 frames to create the 7 billion pixel image, which allows you to zoom in and out, in sharp focus, from the air to the bonnet badge of the new Flying Spur.

The car itself is just as impressive, combining a sporty stance with sharp lines, a more responsive suspension and an increasingly refined ride. The result of 130 man-hours per vehicle, the Flying Spur W12 S is powered by an enhanced 6.0L twin-turbo engine producing 626bhp and 820Nm of torque. That increase in power means that the Flying Spur can blast from 0-100km/h in a mere 4.2 seconds, with a top speed of 325km/h.

Alongside locating the Flying Spur in the gigapixel image, viewers can take a look around the new model’s interior, watch a 360-degree film narrated by John Paul Gregory, Bentley’s head of exterior design, or explore the rest of Dubai (or at least the part captured on camera) in fascinating detail.

Take a look at the image here.