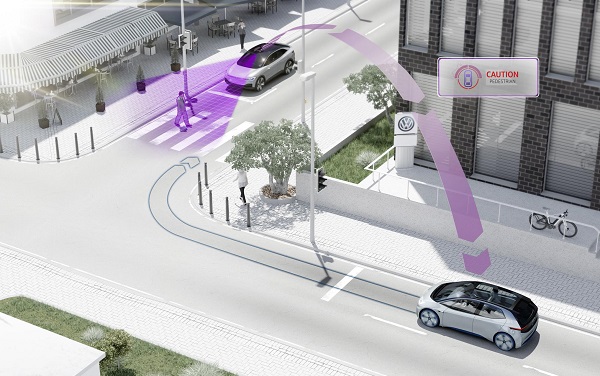 Before the decade is out, cars will be able to talk to each other while out and about. Not like in Pixar’s Cars, but using a new technology known as pWLAN, developed by Volkswagen. Due to be fitted to the first models in 2019, pWLAN will allow for the exchange of information between cars and transport infrastructure (like traffic lights) within a 500m range, such as current traffic and accidents.

Essentially, it’s a way of virtually looking around the next corner. For example, if another car detects black ice just ahead, the system can alert your vehicle’s computer if you’re within range, boosting your reaction times.

pWLAN, which could be a standard feature on Volkswagen cars once introduced, is aimed at minimising accidents (or at least their consequences). The system was announced shortly after the German automaker unveiled plans to work with NVIDIA on using artificial intelligence (AI) to boost collaboration between humans and robots, including the optimisation of traffic flow in city environments.

According to Volkswagen, the system will use a special frequency band designated for “road safety and traffic efficiency” – there are no communications costs, while it won’t have to rely on mobile phone network coverage to work. The plan is to equip emergency services vehicles with the same technology, providing advance warning to drivers to make room long before the sirens come into earshot. Vehicles used to block off roadworks on motorways could also be equipped with pWLAN, broadcasting a warning to help reduce and prevent rear-end collisions.

“We want to increase road safety with the aid of networked vehicles, and the most efficient way of achieving this is through the rapid roll-out of a common technology,” said Johannes Neft, Volkswagen’s Head of Vehicle Body Development. “What matters most is that the technology is used consistently, and by as many manufacturers and partners as possible.”