The new Mini Countryman might have ‘Mini’ emblazoned front and back, but there’s nothing small about it. The second generation of Mini’s chunkier compact crossover is larger and wider than its predecessor, though it’s a little sharper and leaner on the outside.

Looks might be subjective, but I think it’s fair to say the new Countryman isn’t good-looking in the traditional sense. Like all Minis since 2000, the Countryman has a bulbous air about it, like someone who’s overindulged a little too much at dinner. Having said that it’s got a nice stance on the road, and if you’re opting for a colour beyond the usual black or red, Island Blue with the go-faster Cooper stripes lends a great degree of attractiveness.

END_OF_DOCUMENT_TOKEN_TO_BE_REPLACED

Skoda’s Superb is a fabulous car – comfortable, spacious and with a bit of poke, though still relatively ordinary in the grand scheme of things.

Not so one particular model.

END_OF_DOCUMENT_TOKEN_TO_BE_REPLACED

The Audi A8 was one of the first cars I ever reviewed, and took my breath away. Fabulously comfortable, quick off the mark, bristling with technology and boasting sleek good looks, I’ve never forgotten the A8’s ability to experience hyperspace in comfortable surroundings, like a classier version of the Millenium Falcon (sorry Han, she’s still got it where it counts).

END_OF_DOCUMENT_TOKEN_TO_BE_REPLACED

The Rover V8 engine has led an interesting life. The compact aluminium block started life as a Buick engine under General Motors in 1961, weighing just 144kg and delivering up to 200hp at its most powerful, though it was withdrawn just three years later in favour of cheaper alternatives.

END_OF_DOCUMENT_TOKEN_TO_BE_REPLACED

On a recent sunny Sunday in the Powerscourt Hotel, the car park was full – as you might expect – of varying Mercedes, BMW, Audis and Range Rovers. In the midst of them all and stealing most of the admiring looks was the new Alfa Romeo Giulia.

Developed under the Giorgio platform, bringing the rear-wheel drive Giulia to life was something of a daunting task for Alfa – taking an entirely new platform from concept to tarmac within a timeline of three years as part of the brand’s expensive relaunch plans. But the result is quite stunning, visually speaking, a sporty five-door saloon that combines Alfa’s rich heritage with the driving experience you expect. There’s no denying that they’ve created a head-turning beast.

END_OF_DOCUMENT_TOKEN_TO_BE_REPLACED 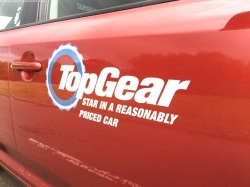 Top Gear’s famous Kia Cee’d, which carted a host of well-known faces, from Tom Cruise to Simon Pegg, around the Top Gear test track between 2010 and 2013, has been put up for sale on Auto Trader. After its stint on Top Gear came to an end it was returned to Kia for use as a promotional vehicle, before winding up in the hands of a private owner, who’s cashing in on its fame.

END_OF_DOCUMENT_TOKEN_TO_BE_REPLACED

The Volkswagen Arteon has just gone on sale in Ireland, priced at €43,295. Volkswagen’s CC replacement, the Arteon slots in just above the Passat, a five-seater fastback that combines plenty of space with sporty driving dynamics and looks.